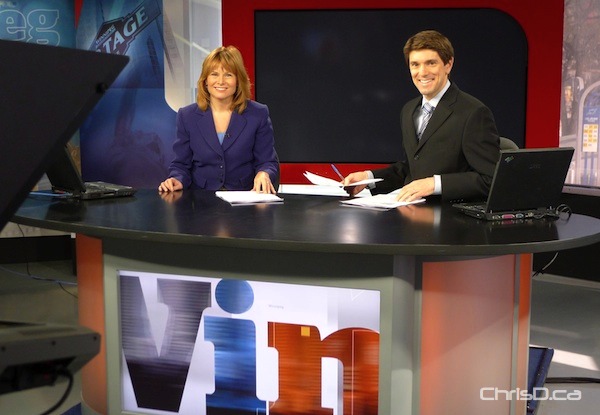 CBC News Winnipeg will have a new look when viewers tune in tonight at 5 p.m.

The station has been broadcasting from their newsroom the last week while their upstairs studio undergoes a makeover.

The studio, which overlooks Portage Avenue, will have a revamped look and possibly more red. Anchor Janet Stewart recently tweeted, “It’s going to look cool (though I won’t be able to wear as much red).”

Along with a new set, Janet will have a co-host by her side to anchor the 6 p.m. cast. Sports anchor Mitch Peacock will handle co-hosting duties for the last half hour of the show. We’re told Janet will continue anchoring the 5 p.m. and 5:30 p.m. casts solo.

A spokesperson for CBC Manitoba tells us Mitch will continue to cover sports, despite his new role delivering the day’s headlines.

Before joining CBC in 2008, Mitch was on Fox Sports World Canada, which taped out of Global Winnipeg’s studios.