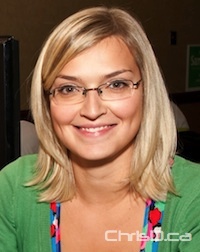 Tania Kohut returned to the Winnipeg Free Press on Monday, reassuming her role as video host for the newspaper’s web presence.

Tania will be fulfilling duties out of the yet-to-open Winnipeg Free Press News Café on McDermot Avenue.

Before leaving at the end of October, she anchored the live civic election coverage on the Free Press website, and narrated the exciting action of the infamous River Heights traffic circle, but her short-term contract wasn’t renewed until now.

We hear Tania even got her old desk back.