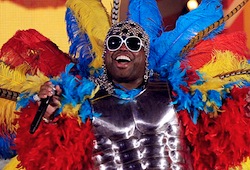 Cee Lo Green performs at the 53rd Grammy Awards at the Staples Center in Los Angeles on Sunday, February 13, 2011. (OVEROLL.COM)

Grammy Award winner Cee Lo Green will open up for Rihanna when she brings her Loud tour to Winnipeg on June 18.

As announced earlier this week, Rihanna will play MTS Centre as part of a summer tour which begins in Baltimore.

Rihanna and Cee Lo both won Grammys on Sunday night in Los Angeles.

Cee Lo is best known for his current hit, “Forget You,” which also has an alternative unrated title.