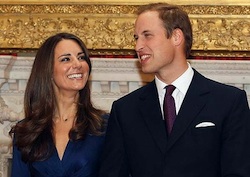 Kate Middleton and Prince William will be touring Canada this summer. (DAILY MAIL)

It hasn’t even been a year since Queen Elizabeth II visited Canada (video), but the country is preparing to roll out the red carpet once again for the royal family.

News of a rumoured visit has been making headlines for several weeks, especially after Prime Minister Stephen Harper extended an invitation to the couple following their engagement in November 2010.

The tour will take place from June 30 to July 8, and include stops in Alberta, the Northwest Territories, Prince Edward Island, Quebec and the National Capital Region.

The couple will celebrate Canada Day festivities in Ottawa on July 1, and will tie the knot in London on April 29.

Unfortunately, royal watchers in Manitoba will have to make the trek to another province to catch a glimpse of the soon-to-be newlyweds.