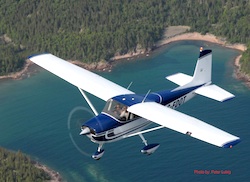 Photographs of the Cross-Canada Century Flight will be on display until February 25 at the Western Canada Aviation Museum.

Flight steward, airline captain and aviation photographer Peter Lubig created an extensive collection of aircraft photographs from the historic flight that took place in 2009. Canada celebrated 100 years of powered flight two years ago with a commemorative flight across the country.

The museum will not only be celebrating the history of flight on Louis Riel Day (February 21), but admission will be a toonie to see the exhibit from noon to 5 p.m.