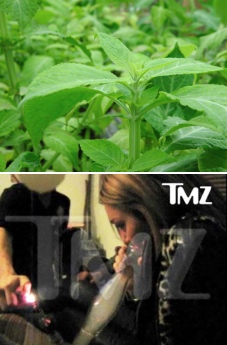 Salvia (top) was the substance of choice for pop singer Miley Cyrus in the infamous video that leaked last December. (PLANTTEACHER.COM / TMZ)

The hallucinogenic herb salvia divinorum, most commonly known as simply salvia, will soon be banned after the federal government formally announced its intentions to do away with the psychedelic drug on Monday.

Speaking at the YMCA-YWCA in Winnipeg, St. Boniface MP Shelly Glover said the natural health product will be added to the Controlled Drugs and Substances Act.

The ban would make it illegal to possess, produce, traffic, import or export the substance.

Salvia is readily available in head shops and over the Internet, but that will soon change. As it stands, it’s already considered illegal to sell it without approval from Health Canada, but those guidelines haven’t been enforced.

Most recently, salvia has been in the news when Miley Cyrus was caught smoking it from a bong. The substance is considered legal in the state of California, but several U.S. states, including a handful of countries, have banned it.

The move by Health Canada is no surprise. On February 4, Ottawa made its proposal known in the Canada Gazette. The notice gives stakeholders 30 days to comment.