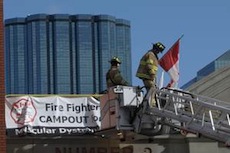 Winnipeg firefighters will camp out at Station #4 on Osborne Street beginning Tuesday. (MUSCLE.CA)

Winnipeg firefighters will camp out on the roof of the Osborne Street fire hall for the second year in a row beginning on Tuesday.

The firefighters will be up there to raise awareness and funds for Muscular Dystrophy Canada.

Last year, more than $30,000 was raised locally, but Edmonton’s challenge was able to pull in $50,000. The firefighters have a personal goal to come out ahead of Edmonton this year.

The campers will be hoisted onto the roof at 10 a.m. tomorrow by an aerial ladder, where they’ll remain until Friday at 1 p.m.

The firefighters will be accepting donations while on the roof, and will also be on the ground at times taking donations from motorists in traffic.

Donations can also be made online.