Home » News » Amphibex Icebreakers Get Busy on the Red River

Amphibex Icebreakers Get Busy on the Red River 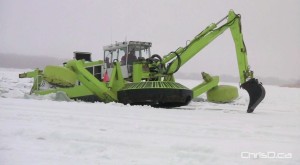 The province’s third and newest Amphibex icebreaking machine was put to work Tuesday at Breezy Point north of Selkirk.

The icebreakers will work on the Red River and begin moving south to break up the ice that was already weakened by the cutters.

New electronic equipment will also assist in the flood battle this year, by having seven GPS units installed on ice cutters to track in real time exactly where the cuts have been made.

The province is also using ground-penetrating radar (GPR) to determine the thickness of the ice on sections of the Red River. As the GPR is towed across the ice, the internal transmitter sends pulses of radio frequency waves into the ice. The pulse reflects or “pings” to the bottom of the ice and sends the signal back to the receiver allowing the operator to accurately measure the thickness of the ice. GPR has been used mainly on the Red River, but also on the Portage Diversion and Assiniboine River.

The area north of Winnipeg has been prevalent to some of the worst flooding in the province, and is the target of $9.8 million in funding for the Manitoba Individual Flood Proofing Initiative.