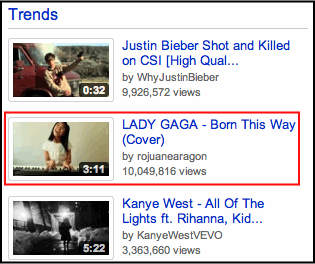 Asked by Ellen why she chose to cover that particular song, Aragon said, “Because of the meaning of the song. It’s a really great meaning. It’s about just being yourself because God may you who you are and you’re no different than anybody else.”

Aragon performed her famous cover for the TV audience, which she taped on Monday, followed by a standing ovation and a gift basket from Ellen.

On Friday, Aragon spoke to Gaga herself during a radio interview, and was invited to perform a duet in Toronto on March 3.