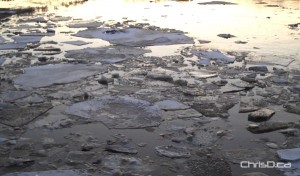 The province updated its spring flood outlook on Thursday, a month after its January forecast, which predicted flood levels similar to 2009.

The latest forecast predicts levels to be a bit higher than originally anticipated, and in the worst case, levels could reach what we saw in 1997 with unfavourable weather conditions. However, provincial flood forecasters say there’s a one in 10 chance of unfavourable conditions.

The second flood outlook shows flood potential remains high for much of Manitoba including the Red, Souris, Pembina, Assiniboine, Winnipeg, Saskatchewan and Fisher rivers as well as the Interlake region.

How much water areas receive depends on weather conditions from now until the spring melt, forecasters said on Thursday. The amount of additional snow and rain, the timing and rate of the spring thaw and the timing of peak flows in Manitoba, the U.S. and other provinces will have a significant effect on flood potential.

Earlier this week, the Amphibex icebreakers began working on the Red River north of Selkirk and will move south to break up ice to prevent ice jams.

UPDATE: The City of Winnipeg responded to this latest forecast by providing details on its own flood preparations.