Moore on Board to Stop Closure of Thompson Vale Plant 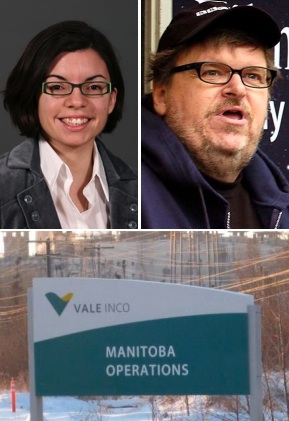 Churchill NDP MP Niki Ashton is getting help from American filmmaker Michael Moore to reverse the decision by Vale to close the Thompson smelter and refinery plant. (HOUSE OF COMMONS / IMDB)

Award-winning filmmaker Michael Moore is joining the fight to stop the closure of the Vale smelter and refinery plant in Thompson.

The closure would have a negative impact on the community and eliminate jobs in the area.

NDP MP Niki Ashton has spearheaded the campaign to reverse the decision by foreign-owned mining giant Vale to close the facility in Thompson.

“Michael Moore’s support for our campaign helps us send the message that this is not just about Thompson, it’s not just about Canada — it’s about all of us fighting to have control of our future,” said Ashton.

Vale received a $1 billion loan from the federal government based on promises to increase employment, but still plans to shut the plant down.

“Right now, Thompson is fighting a frontline battle in a war that’s been raging for the past 30 years — the global war of the world’s rich on the middle class,” More said in a release.

Moore drew parallels between the situation in Thompson and what is currently happening in places across the United States and around the world on his website.