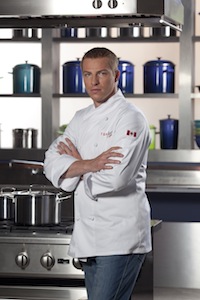 The upcoming season of “Top Chef Canada” will include a 29-year-old Winnipegger.

Darryl Crumb will be among the contestants on the show vying for the title of ‘Top Chef,’ when the season premieres April 11 on Food Network Canada.

Crumb is the executive chef at Winnipeg’s new Brooklyn Bistro and recently held the same title at Vancouver’s Regional Tasting Lounge before moving back east. He originally hails from Anola, Manitoba.

Crumb didn’t always have a knack for being in the kitchen, having previously played professional hockey with the Long Beach Ice Dogs of the former ECHL franchise. A shoulder injury benched him and he eventually found a talent for cooking while off the ice.

He trained at Le Cordon Bleu in Ottawa before moving to Paris, France for further experience.

Crumb will be competing with 15 other contestants with culinary skills of their own, with a grand prize of $100,000 up for grabs and a GE Monogram kitchen worth $30,000.