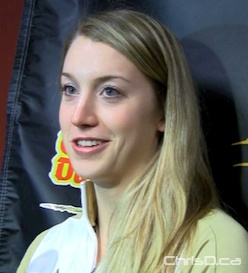 Ashley Voth of the Manitoba Bisons has been named as 2010-11 CIS Women’s Volleyball First Team All-Canadian.

It’s Voth’s third time receiving the honour in her five-year career as a Bison.

“She finished up her fifth and final year with the Bisons in outstanding fashion, and going out as a CIS First Team All-Canadian is certainly fitting as she started as the CIS Rookie of the Year,” said head coach Ken Bentley.

Along with Voth, left side Rachel Cockrell was named to the 2010-11 CIS All-Rookie Team.

“Rachel more than held her own against the top players in the country every week end and earned the respect of our conference throughout the season,” Bentley added.