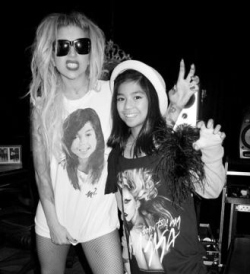 The YouTube star shot to fame in February after posting a rendition of Lady Gaga’s hit “Born This Way,” which has now been viewed more than 17 million times.

Gaga tweeted the link to Aragon’s video, saying it brought her to tears. Thursday at the Air Canada Centre, the pop superstar cried again while Maria performed the song on a piano while sitting in Gaga’s lap. She introduced Aragon as, “Lady Maria from Winnipeg.”

The two spoke briefly on the phone during an interview on February 18 — just two days after Aragon’s video went viral around the world. It was at that time that Lady Gaga invited Aragon to join her on stage at her upcoming concert.

The Grade 5 student has appeared on “The Ellen DeGeneres Show,” “Entertainment Tonight,” and “Good Morning America,” just to name a few of her press stops. GMA did a follow-up story on Thursday, flying a camera crew out from New York to visit Aragon and her family at their Winnipeg home.

Following the concert, Lady Gaga tweeted a photo of the two backstage, saying, “Myself +10 year Old Lady Maria of Winnipeg. She signed my t-shirt, she ate my heart, just like you.”