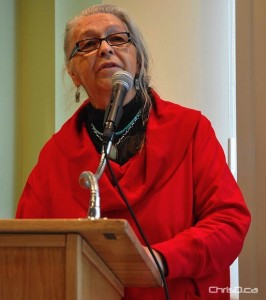 Mae Louise Campbell, Elder-in-Residence at Red River College, delivers a prayer to a large group at the Union Centre on Tuesday, March 8, 2011 prior to joining a march to celebrate International Women's Day. (MAURICE BRUNEAU / CHRISD.CA)

A group of a few hundred women, along with men and children, marched from the Union Centre on Broadway Avenue to the Manitoba Legislature, eventually ending up at the University of Winnipeg.

Marchers held signs celebrating the women’s movement, but some also criticized the recent and controversial remarks made by Manitoba Justice Robert Dewar.

Earlier in the day, the Manitoba government held a ceremony honouring the achievements of women with disabilities.

“We are privileged to benefit from the immense contributions women with disabilities bring to the social, cultural, economic and political landscapes of Manitoba,” said Labour and Immigration Minister Jennifer Howard. “We celebrate their successes and support others in the disability community who are facing and meeting the challenges life has set before them with dignity and determination.”

← Previous: U of W Accused of Fear Mongering in Faculty Contract Talks Next: Elizabeth Shepherd Playing in City on March 18 →
Tags: