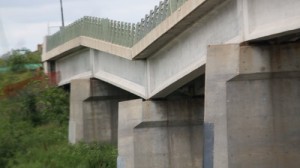 Residents living in and around St. Adolphe will no longer have to take an inconvenient detour after today.

The Pierre Delorme Bridge south of Winnipeg was reopened on Tuesday, after being shut down on August 20, 2009 when it was deemed unstable for use.

The province contemplated letting the structure fall into the Red River, but it eventually stabilized instead of crumbling under its own weight. Part of the structure was salvageable, so crews began dismantling and replacing the affected parts.

The bridge at the junction of Highway 200 and 210 connects Highway 75 to Highway 59. Since it was put out of commission, residents in the RM of Ritchot have been using St. Mary’s Road as their primary entry in and out of the community.

A total of $15 million was pumped into the project, which went to replace the west end of the structure.

While the bridge is officially reopen, brief single-lane closures will occur over the next few weeks and during the summer to complete final repairs.

← Previous: Kid Rock to Play MTS Centre on May 24 Next: U of W Accused of Fear Mongering in Faculty Contract Talks →
Tags: St. Adolphe