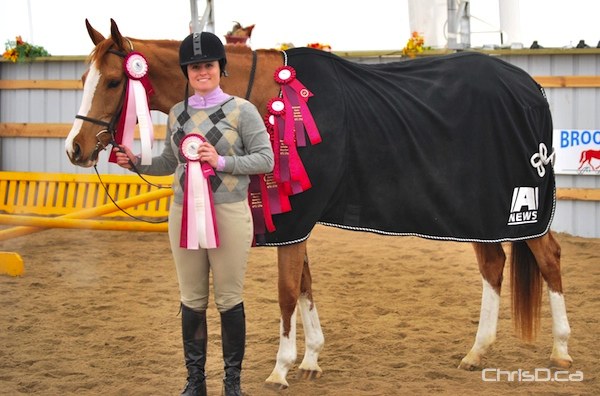 A former Winnipeg news reporter continues to draw eyes in the equestrian world with her stellar wins.

Trina Maus, formerly of Global Winnipeg and now /A\ News Muskoka bureau chief, took a newly-acquired big chestnut mare to compete this past weekend in Orillia, Ontario. Mia Amore, a thoroughbred race horse who was pulled off the track in November, won in every class and was champion in both the Hack and Green Hunter divisions.

Mia Amore was trained to race at an early age — just two-years-old — but unfortunately suffered a career-ending injury before her first race. She was retired from racing, but her owners kept her to breed only until recently.

“I thought she had lots of potential in the hunter ring,” Maus said. “She has had two foals, but because of the down turn in the market, the farm she was at decided to downsize and started selling off most of their mares.”

Maus purchased the horse at an auction at Woodbine Race Track in Toronto. “I was actually there to buy another horse, but as soon as Mia Amore walked in the ring I knew I had to have her instead.” Fortunately, the time off as a broodmare allowed the mare’s injuries to heal properly, dissolving any previous issues.

While chestnut mares have a reputation for being difficult, Maus says Mia Amore is the exception.

“She has such a sweet personality, which is rare for a red head,” Maus added.

Mia Amore has plans to be shown at bigger shows this summer, while Maus’ other horse, Lasting Freedom, a former race horse from Winnipeg, continues to enjoy a well-deserved vacation. His first show will be at the end of April, where he’ll be competing in jumpers.