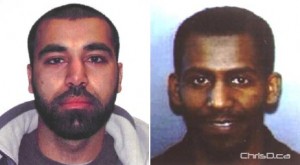 Known as Project Derken, RCMP uncovered evidence that Maiwand Yar, 27, and Ferid Ahmed Imam, 30, conspired to travel to Pakistan for terrorist training, with plans to later join the insurgency against NATO forces in Afghanistan.

Both men are Canadian citizens and former University of Manitoba students with ties to Pakistan, where they both travelled in March 2007.

Canada-wide warrants have been issued as the whereabouts of the men aren’t known.

Anyone with information on where Yar and Imam may be is asked to contact the RCMP National Security tip line at 1-800-420-5805.