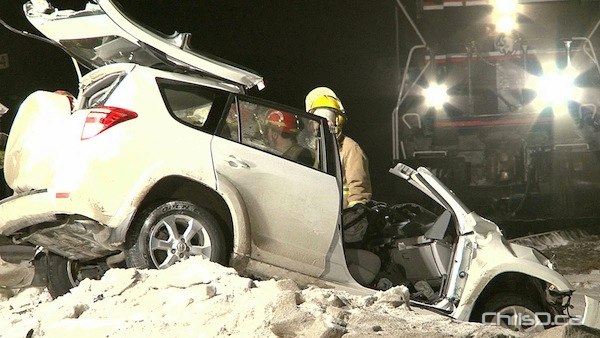 A Toyota SUV sits damaged after colliding with a train on the Perimeter Highway near Oak Bluff early Friday, March 18, 2011. (SHAUN MCLEOD)

A 35-year-old man was taken to hospital early Friday morning after being involved in a serious crash on the Perimeter Highway.

The crash happened at about 4:30 a.m. just north of Oakbluff when the man’s northbound SUV collided with a train.

RCMP say the collision happened at the controlled crossing. There were flashing lights, but no safety arm at the particular crossing.

The man was transported to hospital with undetermined, non-life threatening injuries.

The Perimeter at McGillivray Boulevard was closed while emergency crews cleared the scene, but it has since reopened to traffic.

RCMP are continuing to investigate the cause of the crash.