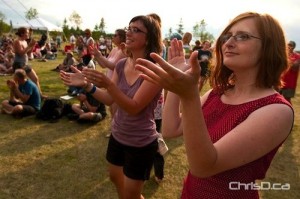 The line-up for the 2011 Winnipeg Folk Festival was released this weekend, promising five days of exciting performances at Birds Hill Provincial Park.

Blue Rodeo will open the festival on Wednesday, July 6. Also scheduled to appear is Tegan and Sara on Thursday, July 7 and k.d. lang and the Siss Boom Bang on Friday, July 8.

This year will see a special tribute to Kentucky musician Bill Monroe — known as the “father of bluegrass.” Monroe is credited for developing the unique style of music named after his band the Blue Grass Boys, and enjoyed a lengthy career that spanned 60 years as a singer, instrumentalist, composer and bandleader.

Early bird tickets for the festival, which runs July 6-10, are on sale now until May 31. Tickets are available for purchase at the Folk Festival Music Store, 211 Bannatyne Avenue, or through Ticketmaster.

Ticket prices, packages and the complete list of performers attending this year’s festival is available at WinnipegFolkFestival.ca.