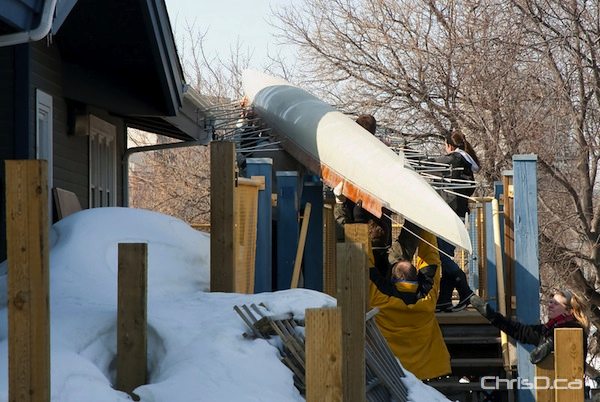 Members of the Winnipeg Rowing Club move their boats and equipment to higher ground on Saturday, March 19, 2011 in anticipation for rising river levels. (TED GRANT / CHRISD.CA) 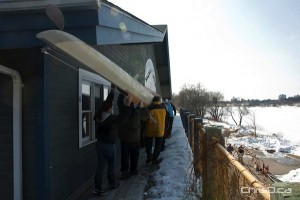 The Winnipeg Rowing Club isn’t taking any chances leaving their equipment down by the Red River as water levels being to rise.

On Saturday, members were out carrying up boats — including a hard to maneuver eight-seater — to a storage unit at the club.

Flood waters are a concern for the club, but they’re taking precautions by erecting a watertight barrier on the west side of their building facing the river.

The club is asking for volunteers to assist with the flood fight when the water begins to creep closer to their property. To get involved, e-mail [email protected].

In a related matter, Manitoba Water Stewardship issued an advisory on Sunday, warning the public that warmer weather has created hazardous ice conditions on rivers, lakes and drainage ditches throughout the province. Officials noted river ice throughout Winnipeg is getting thin and is extremely dangerous.