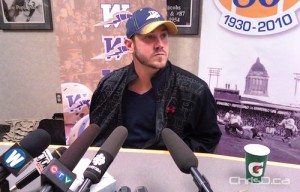 The station announced Monday Pierce will be part of the CJOB Sports Show with Bob Irving.

Pierce will take calls and chat with football fans every Tuesday from 7:05 p.m. to 8 p.m. The exact date of Pierce’s debut will be unveiled in the coming weeks.

The 29-year-old will also offer his insight and perspective into the games during the CFL season.

The show will air in its entirety weekdays from 6 p.m. to 8 p.m.

If you want your daily sports fix earlier, there’s also Hustler and Lawless on Sports Radio 1290 from 4 p.m. to 6 p.m.

← Previous: Provincial Court to Sit on Weekends Under New Program Next: 'Paradigm Brass' to Perform in the City on March 31 →
Tags: Buck Pierce | CJOB | Radio