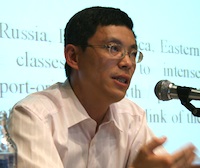 A lecture by a visiting professor will engage the public tonight at the Winnipeg Art Gallery.

The University of Manitoba is sponsoring the lecture given by Minqi Li, an assistant professor of economics at the University of Utah and a Research Fellow at the Political Economy Research Institute.

Li will speak at 7 p.m. about climate change in a lecture entitled, “The Impending Climate Catastrophe and the Historical Possibilities of the 21st Century.”

Li was arrested in China in 1990 for his political activism and public advocacy of democracy in the late 1980s. He has since emerged as one of the world’s foremost experts on Chinese political economy and its significance for the world system.

Doors open at 6:30 p.m. and admission is free. A reception fill follow.