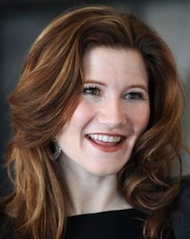 CBC Manitoba reporter Lyndsay Duncombe is packing her bags. And no, she didn’t advance to the next round of “American Idol” auditions.

Duncombe is leaving her position in Winnipeg and moving to the U.S. to become a producer at the network’s Los Angeles bureau.

She made the announcement a few weeks ago to friends on her Facebook page, but only first tweeted about it on Tuesday.

The Saskatchewan native began her career at the CBC in 2001 and has worked in Prince Albert and Toronto since then.