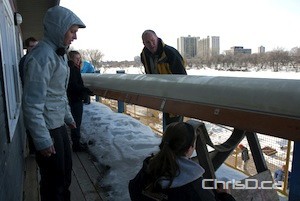 The Winnipeg Rowing Club has itself a new head coach.

Brent Figg will assume coaching duties after moving his family from Cincinnati to Winnipeg last fall. Figg spent the fall and winter getting to know Winnipeg’s rowing community, and taking over the program reins.

Figg coached the summer elite rowing program for women at Vesper Boat Club in Philadelphia before coming to Winnipeg. The club is one of the oldest and most successful rowing clubs in the United States, where Figg’s athletes won U.S. national championships and Canadian Henley gold.

“We were thrilled to find someone of Brent’s calibre as our new head coach,” said Eric Johnstone, president of the Winnipeg Rowing Club. “It’s great to have him here in our community, and we are excited by the potential of our programs under his guidance and direction.”