Home » News » Alzheimer’s Patient Back in Custody After Alleged Assault

Alzheimer’s Patient Back in Custody After Alleged Assault 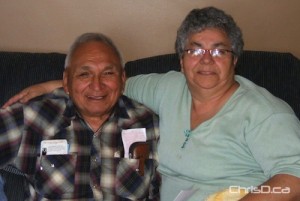 An elderly Winnipeg man suffering from Alzheimer’s disease was remanded back into custody Friday after an alleged assault on another individual.

Joe McLeod made headlines last fall when he was placed in the Winnipeg Remand Centre after not recognizing his wife, Rose, and subsequently striking her.

Now Joe is being accused of assaulting a fellow resident at Parkview Place Personal Care Home. According to the McLeod family, the victim sustained serious injuries in the incident.

“First of all, we are deeply saddened by this alleged incident,” said Faye Jashyn, Joe’s daughter. “I can only imagine what this person’s family is going through at a time like this. I want this person to make a full recovery.”

The family held a Saturday morning news conference organized by the Manitoba Liberal Party to share details of the incident.

The 70-year-old has no recollection of what happened, and the Winnipeg Regional Health Authority is not permitting McLeod to return to the care home. For now, he is sitting back in the Winnipeg Remand Centre in limbo.

“With no hospital or care home that will take him, he could remain in jail for a long time,” Jashyn added.

“I’m mortified that this individual sustained these injuries in a personal care home,” said Manitoba Liberal leader Jon Gerrard. “Second once again, a 70- year old man with Alzheimer’s disease is sitting in a jail cell, and that is just wrong.”

UPDATE: Winnipeg police have since released further details. Police say McLeod and an 87-year-old man were in an activity room at the time when the two become involved in a confrontation on Thursday evening. It’s alleged McLeod assaulted the other man in the upper body, causing him to fall backwards and hit his head on the floor.