Bridge Drive-In Opens for the 2011 Season 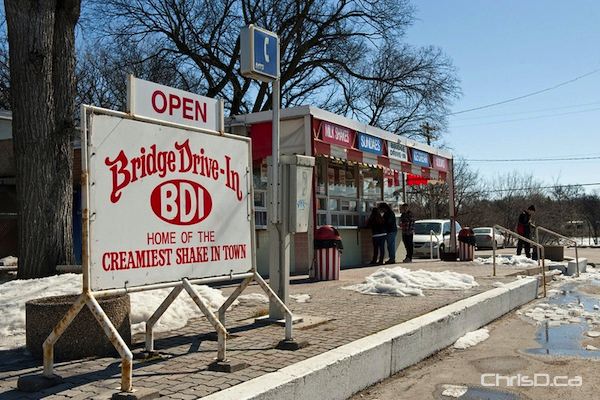 The Bridge Drive-In on Jubilee Avenue opened for the season on Saturday, March 26, 2011. (TED GRANT / CHRISD.CA)

It’s a sure sign of spring when ice cream is on the menu and readily available at one of Winnipeg’s most popular seasonal establishments.

The Bridge Drive-In officially opened on Saturday, offering up its trademark treats with all the delicious calories to go with them.

The day started off a bit slow, but picked up later in the afternoon as people came by for their sugar fix and to take advantage of the nice weather.

Manager Roger Brisebois was happy with the turnout and says he is expecting a bustling season — which is mostly dependent on the weather.

View the photo gallery below from opening day.

The Bridge Drive-In on Jubilee Avenue opened for the season on Saturday, March 26, 2011. (TED GRANT / CHRISD.CA)
← Previous: Hot Rods to Dragsters -- World of Wheels Has It All Next: Winnipeg Artists Shut Out of Juno Award Wins →
Tags: