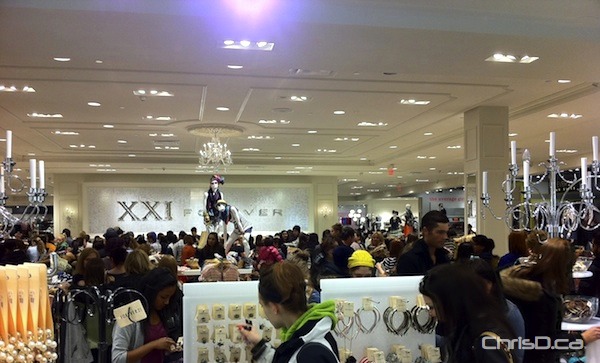 The clothing store that brought with it one of the most anticipated Winnipeg openings in recent memory has reportedly laid off 27 of its recently-hired employees.

Forever 21 in Polo Park Shopping Centre cut a large chunk of its payroll loose on Saturday, just two weeks after opening its largest store in Canada.

The Los Angeles-based clothing chain opened on March 12 to massive lineups, fanfare and about 1,200 eager shoppers ready to open up their wallets.

Most of the staff who received the bad news over the weekend were 16-year-olds who were holding down their first job.

A source familiar with the situation tells us, “(They) went from excitement to disillusionment in record time.”

Many stores often hire employees on a short-term basis to assist with the opening to make sure the first few weeks of operation go as smoothy as possible. We’re told this wasn’t the case, and staff were not under the impression they would only be employed temporarily.

Forever 21 has been in the news for a second time already since it opened. A printing error on customers’ receipts showed a 12 percent Harmonized Sales Tax (HST) for more than a week. Manitoba only collects PST and GST. The store quickly corrected the error when it was brought to their attention and said no one was overcharged because of the mistake.