Home » Photos » The Ugly Side of Spring

The Ugly Side of Spring 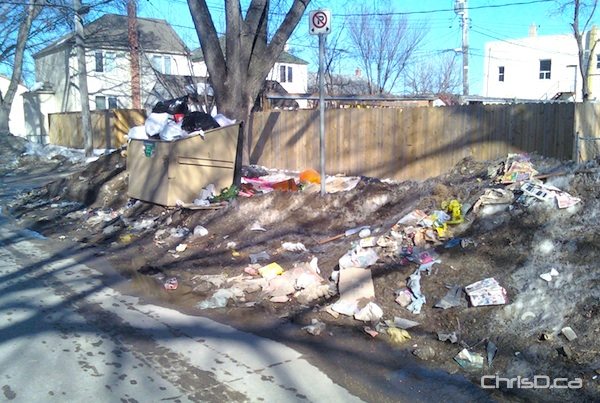 An overflowing dumpster on Charles Street at Atlantic Avenue has made for an unsightly mess. (WPGCAMERAMAN / CHRISD.CA)

As the snow begins to melt, the unpleasant sight of spring begins to show its face.

The City of Winnipeg hasn’t yet started its annual spring cleanup of streets, sidewalks and boulevards, but it can’t come soon enough.

The cleanup shouldn’t be too far off — by April 8 last year, street sweeping and other beautifying efforts were underway. The five-week cleanup in 2010 cost the city $5 million.

As for this year’s cleanup, a city spokesperson tells us, “We need to wait until the temperatures don’t go below zero and snow melts, as the City uses water to clean streets.”

Cleanup downtown is expected to start earlier than in other areas — likely by the end of March or early April.