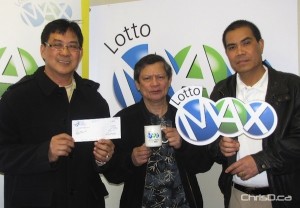 Three Winnipeg men who each contributed $5 to buy a Lotto Max ticket have hit the jackpot.

Abner Gasendo, Rey Dohello and Ben Lopez collected their $1 million Maxmillions winnings when they found out they had won the March 11 draw.

Gasendo had a cold at the time and his co-worker Rey Dohello suggested buying a ticket would be the perfect remedy. “You’ll feel much better when we win,” Dohello recalled in a news release.

The friends purchased their ticket from Giant Tiger at 305 McPhillips Street and say they may go into business together.