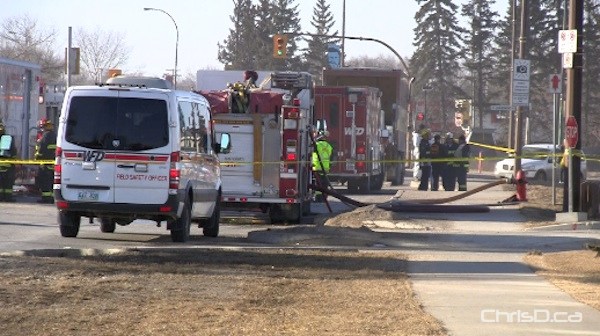 Emergency crews cordon off an area in St. Nortbert while removing chemicals from a vehicle on Tuesday, March 29, 2011. (CHRISD.CA)

Winnipeg firefighters and members of the hazmat team removed several containers of suspicious chemicals Tuesday morning from a vehicle in St. Norbert.

Police pulled over a four-door sedan Monday night on Pembina Highway near Grandmont Boulevard after observing it driving in an erratic manner.

Police discovered the vehicle in question has lapsed insurance. The 27-year-old male driver was believed to be under the influence of an unknown substance and place into custody.

A further search of the vehicle revealed large cylinders and plastic bottles in the trunk of the car. Police say the items found were consistent with a methamphetamine production.

Traffic in the area was affected for several hours as police investigated. The sedan was parked in a roped off area in the parking lot of the Mac’s convenience store.

The man is facing a number of charges. His name hasn’t been released.

UPDATE: Wednesday, March 30 — The suspect has been identified as Brendan Kyle Shepert. He remains in custody.