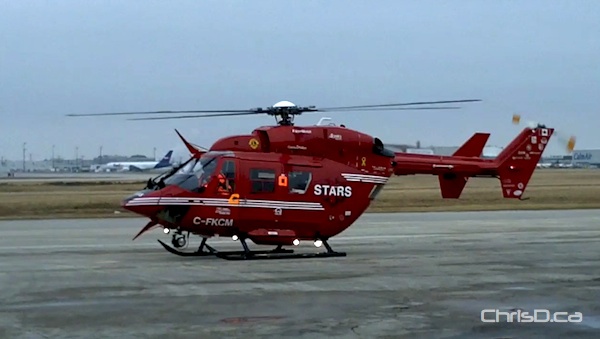 The STARS air ambulance arrived in Winnipeg on Friday. (CHRISD.CA) 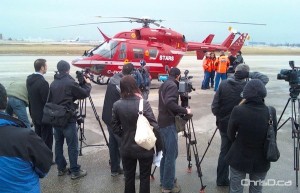 Media gather on Friday, April 1, 2011 for the arrival of the STARS air ambulance and paramedic team. (CHRISD.CA)

The Shock Trauma Air Rescue Society (STARS) helicopter ambulance will be flying above Manitoba in the coming weeks during the spring flood.

The non-profit aircraft and its expert medical team will ensure the safe rescue and transport of anyone requiring medical attention, but cut off due to flood water.

“The unique ability of a helicopter to provide rapid response to emergencies and transport patients for a faster arrival at Manitoba’s medical centres of excellence was proven in 2009 when life-saving missions were attributed to STARS,” said Premier Greg Selinger. “This year, the STARS aircraft and expert medical crew will be equipped with night vision to allow response around the clock.”

Manitoba is in the process of acquiring its own permanent helicopter medical-response program. The aircraft could help save 30 to 50 lives annually, Selinger noted.

On Wednesday, the province showed off its aerial rescue team, equipped with the ability to rescue stranded residents whose roads may be inaccessible during the flood.