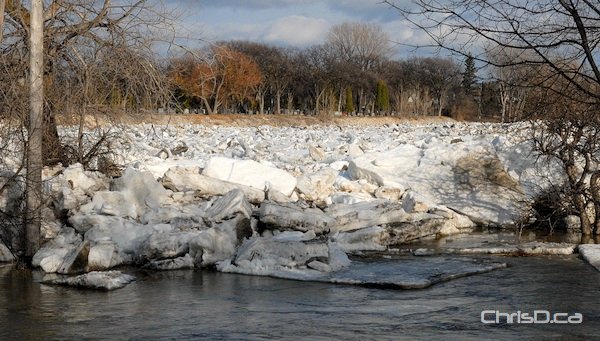 An ice jam that formed on the Red River near the Redwood Bridge Thursday has since broken up. (STAN MILOSEVIC / MANITOBAPHOTOS.COM) 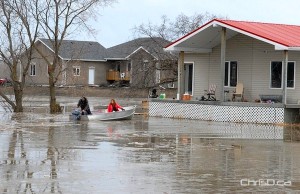 Homeowners use a boat to access their property in Breezy Point on Friday, April 8, 2011. (STAN MILOSEVIC / MANITOBAPHOTOS.COM)

River levels in Winnipeg have dropped more than a foot overnight as the ice jam near the Redwood Bridge broke apart.

Ice was plaguing many spots along the river Thursday as sandbaggers were eagerly trying to protect low-lying properties before the river could rise any further.

On Friday morning, the Red River at James Avenue sat at 19.7 feet.

Sandbagging efforts continue today and will do so into the weekend as volunteers are still required to help out. Late Thursday, the city put out an urgent call for an additional 150 volunteers to help last evening. Dikes are required to be complete at 110 low-lying properties by Sunday. If you can help, call 311 to give your availability and be assigned to an area. 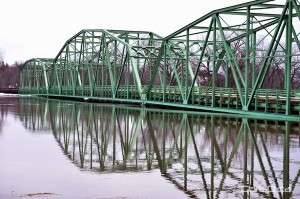 The bridge in St. Jean Baptiste will be closed soon as river water approaches the roadway. (MARC EVANS / CHRISD.CA)

Meanwhile, the bridge in St. Jean Baptiste is close to being shut down as river water creeps along its sides. A provincial official surveying levels on Thursday said the bridge could be closed by Saturday.

UPDATE: 11:12 a.m. — Manitoba Public Insurance is reminding motorists to remove all snowmobiles, recreational vehicles and motorcycles to higher ground if they’re in a flood-prone area. MPI also warns drivers to be careful on soft road surfaces, as they could break away unexpectedly if surrounded by water. In the event of flooding, vehicle owners are still responsible for renewing their driver’s license and vehicle registration.

UPDATE: 11:48 a.m. — The RM of St. Andrews has declared a state of emergency due to rising floodwaters. One home in Breezy Point was destroyed early Friday after its dike was breached. Other homes around it are also now threatened after an ice jam caused water levels to rise in the community north of Winnipeg.

View our flood gallery of photos taken around the province on Thursday.

An ice jam that formed on the Red River near the Redwood Bridge Thursday has since broken up. (STAN MILOSEVIC / MANITOBAPHOTOS.COM)

The bridge in St. Jean Baptiste will be closed soon as river water approaches the roadway. (MARC EVANS / CHRISD.CA)