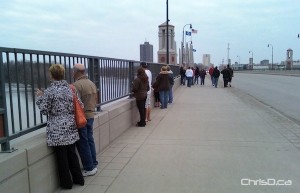 Fargo residents keep an eye on the rising Red River from the Veterans Memorial Bridge on Friday, April 8, 2011. (WPGCAMERAMAN / CHRISD.CA)

Predictions from the NWS suggest the river could reach 40 feet by Sunday. To put these levels into perspective, anything over 30 feet is considered “major flooding.” Rain is in the forecast for tonight and Sunday, bringing about an inch of precipitation.

Volunteers have been working feverishly to secure sandbag dikes and ensure Hesco barriers and tube dikes hold up as the crest approaches. A distribution of more than 230,000 sandbags yesterday are still being placed securely at homes across the city.

Crews acted quickly to fix cracks in an emergency levee in downtown Fargo on Friday. Truckloads of clay were being hauled in to widen the levee on Second Street and maintain the stability of the barrier.

Forecasters say the crest could hit either Sunday or Monday. Water will then make its way north to Winnipeg by the first week of May.

We have a camera in Fargo this weekend and will bring you more video from the scene south of the border.