Home » News » Volunteers Come Out in Droves to Help Sandbag

Volunteers Come Out in Droves to Help Sandbag

About 50 students and staff from the University of Manitoba spared a few hours Saturday afternoon to help sandbag a home on Lord Avenue in St. Norbert.

Joined by volunteers and several politicians, as well as the ladies from the Winnipeg Roller Derby League, roughly 250 people were spread out amongst a number of properties near the Red River.

A few kilometres away, the Red River Floodway gates were already open, allowing for water to divert around the city and ease the burden on homeowners before the crest hits in a few more weeks. The province raised the second gate at noon and is expected to raise another by 6 p.m. 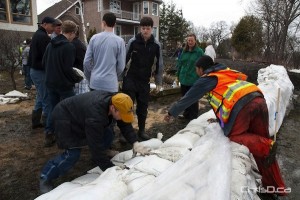 The Red River at James Avenue was sitting at 20.68 feet Saturday, up 0.9 feet since Friday and another 1.8 feet downstream, resulting in six inches of water over Forbes Road.

While all the attention is on the Red and Assiniboine Rivers, part of Ness Avenue will likely close by the end of today due to Sturgeon Creek overflowing its banks. 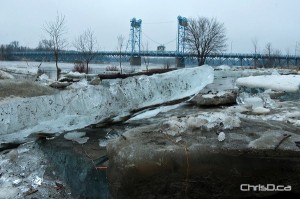 Large pieces of ice gather on the shore near the Selkirk Bridge. (TED GRANT / CHRISD.CA)

The city is still asking for volunteers to call 311 and lend their time sandbagging this weekend and into next week. Out of town residents wanting to help can call 1-877-311-4974.

Outside of the city, residents in the Petersfield area were evacuated after an ice jam on the Red River backed up water in Netley Creek on Friday night. The RM of St. Andrews evacuated approximately 50 homes Saturday in the Jenny Drive area of Petersfield. Voluntary evacuations are also underway in the Breezy Point area.

Officials with Manitoba Water Stewardship estimate Highway 75 at Morris will be closed in the next two to three days. The stretch of highway leading to the U.S. was closed for 35 days in 2009.

More rain is in the forecast for southern Manitoba leading into Sunday, with an additional 10 to 20 millimetres expected in the next 24 hours. Upwards of 40 millimetres could fall in localized areas.

UPDATE: 6:48 p.m. — The city needs 900 volunteers to sandbag on Sunday and may need another 900 on a daily basis until further notice. Nearly 800 volunteers were deployed to 16 dike-building locations on Saturday.