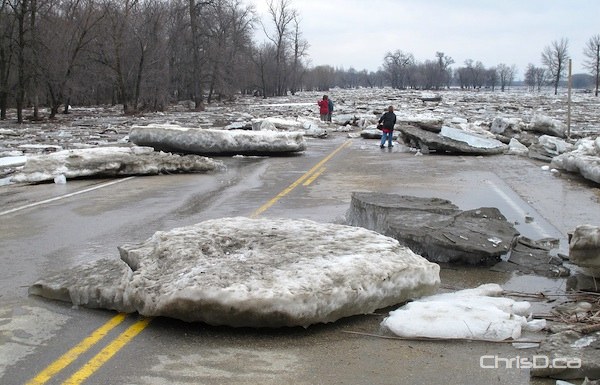 An ice jam in East Selkirk on Saturday has since broken up, creating open water between the town and Winnipeg. (JULY MILOSEVIC / MANITOBAPHOTOS.COM)

The province is partially closing ring dikes in a number of communities today, including Ste. Agathe, St. Adolphe and Gretna.

The closures come one day after Highway 200 (St. Mary’s Road) was closed to non-local traffic from Courchaine Road to St. Adolphe south of Winnipeg.

North of Winnipeg, about 50 homes in the Petersfield area were voluntarily evacuated due to an ice jam north of Netley Creek. Sandbags and flood barriers tubes were continuing to be put in place.

Evacuees in the RM of St. Andrews who left their homes on Friday were returning by Sunday, as water covering the road had receded.

In Selkirk, the Red River was beginning to flow smoothly again after an ice jam raised water levels earlier in the weekend.

For the latest on provincial road closures due to the flood, visit www.gov.mb.ca/mit/roadinfo.