Home » News » Astronaut to Speak with Students at Manitoba Museum

Astronaut to Speak with Students at Manitoba Museum 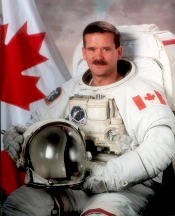 Astronaut Chris Hadfield from the Canadian Space Agency is making a special visit to the Manitoba Museum on Tuesday.

Hadfield will speak to school groups and visitors about his profession and what it’s like to travel in space.

His visit to the museum is in honour of the 50th anniversary of the first manned space flight by cosmonaut Yuri A. Gagarin of the Soviet Union on April 12, 1961.

Hadfield has flown twice before — once to the Russian Mir space station in 1995, and once to the International Space Station in 2001.

In March, Hadfield spoke to students from Oakenwald School via Skype.