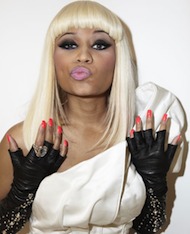 Britney Spears will have Nicki Minaj as an opening act when she brings her “Femme Fatale” tour to Winnipeg’s MTS Centre on July 4.

The all female line-up will also include Jessie and the Toy Boys and Nervo.

The tour was originally supposed to include Enrique Iglesias, until the singer backed out after it was announced a few weeks ago.

Tickets for the show go on sale May 7 at 10 a.m. through Ticketmaster.