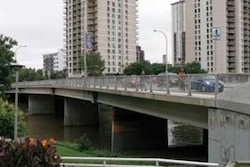 You may want to find an alternate route during your daily commute today, as the Osborne Bridge is about to get an overhaul.

Construction is set to begin on the east side of the bridge from Broadway to River Avenue and will last until October.

Traffic will be diverted in both directions on the west side of the bridge.

Next April, crews will work on the opposite side of the bridge and traffic will be shifted to the east side.

Transit routes will not be affected during the construction.

← Previous: U of W Fundraising Dinner to Fund Scholarships Next: Expert Warns to Drive Cautiously Around Water →
Tags: City of Winnipeg | Construction | Traffic