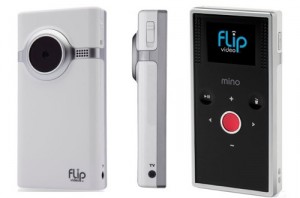 After four years of providing on-the-go producers with the ability to capture HD video in a matter of seconds, Cisco announced Tuesday it would be shuttering its popular Flip camera line.

The pocket-sized video recorder originally put out by Pure Digital Technology was taken over by Cisco in 2009 for $590 million.

The Flip had the ability to capture 720p HD video and the option for a wireless mic in most-recent models. The product rolled out in the U.S. to start and only became available in Canada within the last two years.

Cisco cites competition from smartphones as the reason for halting production of the Flip. The iPhone 4, for example, can shoot HD video, as well as edit and upload it to the Internet in a few taps. Similar phones, such as Android devices, can also do the same thing.

Along with the restructuring at Cisco comes the slashing of 550 jobs.

The Wall Street Journal put together a nice comparison video of the Flip camera and the iPhone 4. It’s a sad day for Flip lovers, but the decision by Cisco appears to be a justified one.