The number of properties needing flood protection has dropped significantly after the province released its latest forecast on Wednesday. 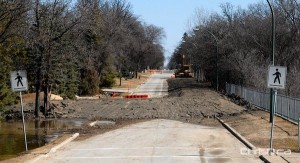 A clay dike along Bonner Avenue has been built to protect homeowners from the Red River. (STAN MILOSEVIC / MANITOBAPHOTOS.COM)

The Red River at James Avenue is sitting at 19.6 feet after dropping about a foot since the floodway began operating on April 9.

The City of Winnipeg has since reduced the number of homes requiring protection from 560 to 129. Thirty-five of these homes have had dikes in place since April 10, while 94 of the homes will require sandbags for the upper level of 22.8 feet James expected. 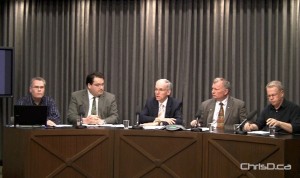 Officials with the Province of Manitoba update the flood forecast during a news conference at the legislature Wednesday, April 13, 2011. (CHRISD.CA)

The majority of at-risk properties are along Kingston Crescent, Scotia Street and Glenwood Crescent.

The lower water levels have also had a positive impact on Sturgeon Creek, which has since dropped allowing for traffic on Ness Avenue to flow as usual.