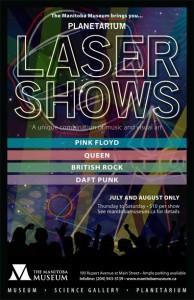 The Manitoba Planetarium is bringing back their successful Laser Shows this summer and needs your input on what bands you’d like to see this year.

Last summer was the first time in 17 years the Planetarium resurrected the popular program, which thrilled thousands of visitors during its two-month run with carefully-choreographed laser movements set to the tune of popular songs.

The show will run July and August and could include shows by The Beatles, Michael Jackson, Queen, Jimi Hendrix, Aerosmith, Metallica, Pink Floyd, and more.

Five pairs of tickets are available to be won by participating in the short survey.

The survey will close on Monday, April 25.