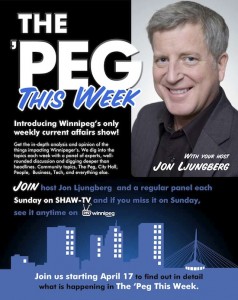 “The ‘Peg This Week” is an extension of Winnipeg Women, Winnipeg Men and Marketplace Magazines and will be hosted by Jon Ljungberg, formerly of Citytv ‘s “Breakfast Television.”

Local issues will be on the table for discussion, with a weekly panel of guests making things happen in the city.

This week’s show will feature Dave Angus of the Winnipeg Chamber of Commerce, Barry Rempel from the Winnipeg Airports Authority and Brian Kelcey from the State of the City blog talk about the new airport.

The show will air Sundays at 8:30 a.m. and continue in a loop throughout the day and night.

Episodes will also be available on iTVWinnipeg.com.