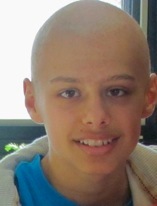 A benefit social for a 12-year-old Winnipeg boy battling a rare form of cancer has been planned for Saturday, May 7.

Aleksei Minarik was diagnosed with PNET Ewing’s Sarcoma when a tumour was found at the base of his spine. This particular type of cancer usually occurs in teenagers and is more common in boys.

Aleksei’s initial symptoms were a sore lower back and tight hamstrings, which if had been ignored, could have caused the cancer to spread through his entire body.

“Our primary goal is to get Aleksei to the end of his treatment and hear the words ‘cancer free,'” said Aleksei’s mother, Alli Minarik.

A “Courage Rocks” fundraising social will take place in Great Hall at University College on the University of Manitoba’s Fort Garry campus from 8 p.m. to midnight.

Tickets are $10 and include the chance to win a number of prizes.

All proceeds will go towards a wish list of items agreed upon by Aleksei and the child life specialists who work with kids fighting cancer.

Further details can be found at CourageRocks.ca.