Premier Greg Selinger toured the Manitoba Emergency Co-ordination Centre on Tuesday to get a look at the multiple agencies that work around the clock monitoring the 2011 spring flood. 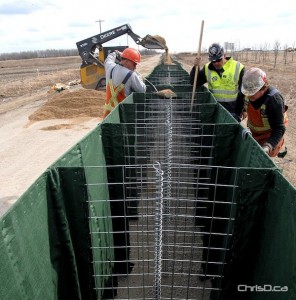 Large flood-barrier tubes were setup Tuesday in Melita, adding support to the community’s clay dike already in place. The move comes as the crest on the Souris River approaches. Upgrades to the dike were also being made along Highway 3 and Highway 83, which were originally constructed in 2009. The community is currently under a state of emergency as residents prepare for a possible evacuation.

The province also said the Red River Floodway gates would be raised again as levels on the Red continue to rise, along with the Assiniboine. The gates will stay raised to just over 760 feet until the crest on the Red hits between April 30 and May 4. 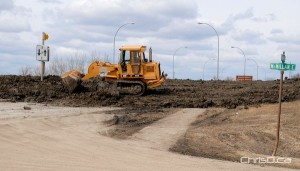 Crews build up the dike on the north side of Morris on Highway 75 Tuesday. (STAN MILOSEVIC / MANITOBAPHOTOS.COM)

South of Winnipeg, 50 people from the RMs of Ritchot and Montcalm have been evacuated after the Red River cut off access to their homes.

Overall, this season’s flood has been unprecedented for road closures in communities across the province, having forced the closure of approximately 500 municipal roads.