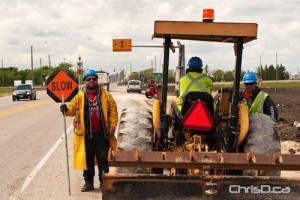 Another call to sway the Manitoba government to share one point of the existing provincial sales tax for infrastructure spending was made on Tuesday.

The two said said an annual contribution of the PST would create a reliable source for funding municipal infrastructure.

Although the province’s budget last week promised funding to address infrastructure needs in rural areas, the money would come from the same source.

“In reality, provincial funding from general revenue would now come from the PST, effectively repackaging money under a new name but from the same pot of money,” a statement from the mayor’s office read.

“If you actually want to do something positive and constructive to improve infrastructure for the citizens of Winnipeg, then step up and do what’s right and provide municipalities with a real funding source to address the priorities of the people who’ve elected you,” Mayor Sam Katz said.

“Every citizen in every community in Manitoba is affected by our crumbling infrastructure on a daily basis,” said Doug Dobrowolski. “The infrastructure deficit in this province is in the billions of dollars and municipalities just can’t handle it on their own. We need a new source of growth revenue dedicated to fixing the problem.”