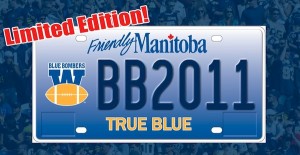 Football fans will soon be able to show their support for the Winnipeg Blue Bombers by fastening a special licence plate to their vehicle.

Manitoba Public Insurance and the Blue Bombers announced the initiative on Thursday, saying the plates will be available in time for the 2011 CFL season.

“This is another great opportunity for fans across the province to show their Bomber pride,” said Blue Bomber president Jim Bell.

The special, limited-edition plates will be available in early June through more than 300 Autopac agents across Manitoba.

Following the introduction of the Bombers’ plate, an evaluation will be done to gauge interest of creating further plates for community groups and organizations in the province. In 2004, Manitoba created a specialty licence plate to honour veterans.

The Saskatchewan Roughriders already have their own customized plates.