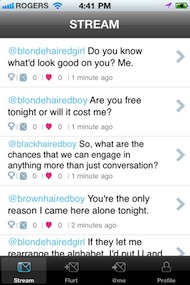 A new Winnipeg-developed smartphone app has hit the market, making it easier to flirt with those around you.

The appropriately-titled “Flurt” app is available on the iPhone and Android devices and works as a location-based service to send anonymous flirts to those in your vicinity.

“Flurt is the digital version of passing notes during class or approaching someone at a bar,” said co-developer Varun Mehra, a 25-year-old computer science graduate from the University of Manitoba. “Flirting is an instinctual behaviour of verbal and physical cues, and this mobile app provides a new dimension to the art of flirtation.”

Those who download the app can send and receive flirts within 150 metres of others.

“Flirting is universal and we’ve all been in situations where we wanted to compliment or flirt with someone, but have been shy,” said Jeff Friesen, 23, Flurt app developer. “For us, it was a logical leap to create a way for people to make that first introduction more easily and reduce the risk of something we all cringe at – embarrassment or rejection.”

The app is free to download at Flurt.me or by searching for it in the App Store or Android Market.