The bridge leading into Morris is submerged by water as seen on Sunday, April 24, 2011. (STAN MILOSEVIC / MANITOBAPHOTOS.COM) 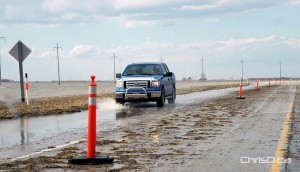 A truck drives through water on Highway 75 south of Morris on Sunday. (STAN MILOSEVIC / MANITOBAPHOTOS.COM)

A number of residents were evacuated from Morris over the weekend, as the crest prepares to hit the community.

Homes in the town aren’t at risk, but officials fear road access could soon be cut off, trapping residents inside the ring dike.

Flood forecasters predict the Red River crest to arrive in Emerson by today or Tuesday — bringing with it water levels similar or slightly above 2009 levels. 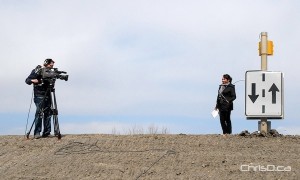 On Friday, strong south winds led to the partial closure of Morris’ ring dike at Highway 75. Access into the community is still possible through highways on the east and west sides of town.

A dirt ramp at the south end of Highway 75 is passable to motorists.

Morris will see the height of its river levels by Wednesday or Thursday.

On Monday, Highway 23 from Highway 422 to Morris was closed due to water over the road.