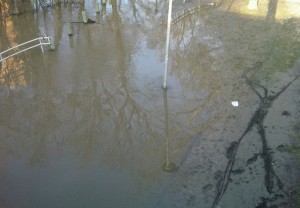 The west sidewalk used for pedestrian access while the Osborne Bridge undergoes repairs is currently under water. (PAULHESSE.CA)

Residents living in Osborne Village were cut off from accessing the downtown area on Monday due to ongoing work on the Osborne Bridge.

Over the weekend, pedestrian and cyclist access on the west sidewalk was blocked due to water from the Assiniboine River over the pathway.

The east sidewalk has also been closed as construction crews continue to work on the structure — work that began on April 12.

“Pedestrians need a better way to get to and from downtown,” said Paul Hesse, an Osborne Village resident and Liberal MLA candidate for Fort Rouge. “And jaywalking between Mostyn and Assiniboine is not a viable solution.”

Hesse says the city has considered installing a temporary crossing at street level, but determined that it is not safe to do so.

A permanent street level crossing will be provided for pedestrians and cyclists from Assiniboine Avenue to Mostyn Place as part of the project, but won’t be available until October 2012.